There’s a ceremony in Tantra that involves naming your genitalia. Some western traditions of sacred sexuality contain information about reconnecting to your genital sense of Self. I was intrigued with all this when I first began my studies of various traditions of sacred sex. There are so many layers of shame and confusion that prevent us from having a relationship with our precious most private parts, and I thought the naming ceremony was a brilliant way to reconnect…a baptism, of sorts. My lover of that time was such a lucky man, as I was trying out the things I was learning with him. The summer of 2000 was one of the best in my memory. We were playfully, innocently loving each other and enjoying the lightness of our loveship – no expectations, no plans, no demands – that was our motto.

One brilliant, crisp July morning we headed for a stream in South Boulder that we’d visited earlier in the year, when there was still ice along the edges. We’d spotted a boulder in the middle that looked smooth and even, the perfect place for a picnic. Removing our shoes, we waded into the icy cold water, carrying our essentials. We had the makings of mimosas – champagne and orange juice, a comfy blanket and some pillows, some fruit, a little primo chocolate, and a copy of “Jitterbug Perfume,” by Tom Robbins.

The rock was the perfect spot for some kissing, some reading and some culinary indulgence. We’d picked up some of the biggest, most luscious looking peaches I’d ever seen at the farmer’s market on our way out. We dropped them into the stream for chilling as we read a bit and enjoyed the sun and the sounds of the rushing water. After a while, we pulled the peaches up beside us. I suggested we both take a bite out of one at the same time, as we gazed into each other’s eyes.

We’d been talking about the naming of my yoni for a while. Nothing we’d come up with so far had seemed just right. As our eyes met with that peach between our lips, taking an intoxicating, juicy bite, we both said, through the mouthfuls, juice dribbling off our chins, “Her name is Peaches!” Gasping, gulping, giggling, I rolled off the rock and into the icy cold stream and we baptized her right there. And Peaches is her name.

Fast forward to the grim, gray, bone-chilling coldness of a central Texas January, 2004. Since leaving my home in Boulder, I’d been through a weird kind of chaotic instability, floating without a home, traveling in my new old truck, and suffering through a living situation that had ended with a long-term friendship blowing up, causing me to find myself homeless again at the end of the year. On top of this, I was in the last throes of menopausal hell. No health care, no money to get herbal help, feeling fortunate to have food stamps. I’m of the opinion that menopausal women should be carried around on satin pillows, with a hot young stud working the fan. This is not what I was getting. But I did get a temporary place to live in a little bungalow cabin in the woods. In front of this cabin was an ancient looking tree that I suspected was dead. It was squatty and broken and was probably a fruit tree of some sort, I thought. It held a certain kind of comfort for me somehow, and I’d stumble out to it and lay in its low branches, breathing deeply and asking for help. I needed to feel like I had something still to offer. I needed to know that my heart could still love after being so broken, so many times, by so many tragedies. I needed hope, and it seemed there was none.

As the weeks wore on, I visited this tree almost daily, telling it my troubles. In early March there were buds on it. By mid-March is was obvious that this was, in fact, a fruit tree and I delighted in bringing armfuls of the blossoms into town and distributing them to everyone I saw. I knew that if the fruit were as plentiful as the blossoms, it would break the tree apart. And that’s just what happened. The tree filled with hundreds, thousands of tiny peaches, and I watched them grow into the juiciest, prettiest little things you’ve ever seen. Tasty, too. That tree broke completely apart, in spite of my call to friends to bring buckets and harvest all they could. And I did gain hope. If that tree could bloom it’s little old heart out like that, in its last season, surely my life could blossom again.

Jade is an Intimacy Consultant. Visit her website: 50shadesofjade.org 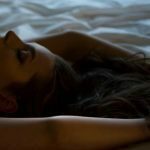